Mark Linkous was an exceptional artist who spent most of his life in relative obscurity. Although he was somewhat of a hermit, his musical collaborations went far and wide, and included even my other unfathomable hero: David Lynch, someone Mark himself admired. But the music that touched me the most were the songs he made by his lone self, in his cramped spider-infested studio, all sounds of his surroundings, from creaking toy pianos to his mom on the answering machine, leaking into his whisper quiet songs. He truly created some of the most beautiful music I've ever known in my life.

One of the most meagerly courageous things I ever did was walking up to Mark when I saw him strolling along after a show in Utrecht, to shake his hand and stammer something about how much I loved his music. Although he was in a hurry, he genuinely appreciated it and thanked me - then he went on his way.

Mark took his life 10 years ago today. It sometimes still is hard to come to terms with the fact that he's no longer around.

I made yet another song, going for something different this time. I called it "Exy", a title I partly took from the Speedy Ortiz song "Hexxy". Wolfshoek

New Wolfshoek song called "Katydid", that has been half-finished for about a year. You might recognize the drums from Death Cab's "Amputations". Wolfshoek

Made a new song, a bit different from the sweet little tunes I posted earlier. It's called “De Luwte” Wolfshoek

Twenty years ago today, I first saw “The Blair Witch Project”. You've probably seen it too. I went into the theatre knowing just enough about the movie to spark my interest, and yes, I was fully aware it was all fabrication. It turned out to be a nerve jangling experience from which I never fully recovered. Seeing the film wasn't exactly enjoyable in the general sense – 'exhausting' is a better way to describe it. Movies didn't usually shake me this way, and I left the theatre with a huge admiration for what I just saw.

My admiration steadily grew into an obsession after discovering that “The Blair Witch Project” was part of a much bigger story, all of it meticulously pieced together before the theatrical release was even concocted. More than a year before anyone took a camera into Seneca Creek State Park, these eight minutes were all the Blair Witch Project was. At that time, the movie that would come to unnerve the world was no more than a suggestion, but the story that it was a part of was already there.

Like other stories of unexplained disappearances and ghostly apparitions, the witch mythology that the creators dreamt up is haunting in itself, more so because it doesn't provide any answers. The lengths to which they went to convincingly execute upon this story is astounding to this day. I mean, they so not broke character that in a faux documentary about their faux documentary, the creators referenced the entity of the Blair Witch theatrical release as just “some scary noises in the woods at night, and a few examples of that”.

What caught me the most about this story is the steady pace in which the centuries-old witch mythology crept ever closer, then suddenly took a leap into the present day. Allowing for the just the tiniest notion that mysteries do exist in this world.

Pitchfork retroactively reviewed a b u n c h of Stereolab's earliest records, which is great. Even though the band is in the process of reissuing some of their back catalog through their own Duophonic label, I don't believe these five each are part of that. And Pitchfork didn't even review all of Stereolab's early albums, because the often overlooked “Space Age Batchelor Pad Music” again is ignored. General

I never felt sure about the respawning of Sleater-Kinney. Their breakup in 2006 was a blow to the stomach – more so because I never saw them live, coupled with the fact that they quit right after releasing 2005's earth-shattering The Woods. Sleater-Kinney left behind a legacy that's out of this world. They unexpectedly returned ten years later with an album that sure was good, but didn't nearly sweep me off my feet like every single one of their previous albums did. No Cities To Love felt too polished, too calculated, even had one or two outright clunkers on it. But then again, selfishly speaking, they needed to make this album so that I'd been given a chance of seeing them live. It sure was an unforgettable experience.

Janet quitting the band, stating that Corin and Carrie are "heading in a new direction and it is time for me to move on", has left me worried that my favorite band in the world might be off to territories where I won't follow. St. Vincent, who produced the album, herself took a hard turn away from rocking the fuck out and towards highly stylized and detached albums and live shows. To be honest, that's not what I wish upon Sleater-Kinney. I like them to shred and rip it up, sheer tornado force that they are, Janet hammering on the drums. Carrie must remember admitting being afraid that "toothlessness was where we seemed to be headed in indie rock."

It's the ruthless fangs of nostalgia, of course. I don't want the days of "Jumpers" to be gone. But I also don't want to withhold Sleater-Kinney any chance of renewal – it's their call to make, their music will always mean the world to me. But maybe I can't follow them every turn they take.

Bill Callahan's new album is gorgeous gorgeous gorgeous. His music drifted away from me since the stellar "Sometimes I Wish We Were An Eagle", which was released a stunning 10 years ago, and still is one of my favorite records ever. Callahan will be playing in Utrecht later this year, at the same venue where I last saw him. Music

I got an emergency ticket to the Best Kept Secret festival, should I not have been able to find a way into Stereolab's sold-out show at the Botanique in time. Although I suppose outdoor festivals this size aren't for me, it was great seeing Stereolab again, and Priests later that day. Their off-kilter songs sent some of the crowd out the door perplexed, but I thought they were awesome. Music

Stereolab reigned supreme in Brussels. Their show consisted exclusively of old songs, of course, because there aren't any new ones. Some of those are my favorite songs in the world. A true blessing seeing and hearing them for the first time in, for me personally, eighteen years. Music

Even after reissuing a bunch of their early compilations last year, I didn't expect the news that Stereolab, for the first time in almost ten years, would actually be touring again. This year they'll be re-releasing another bunch of their records, from 1993's landslide "Transient Random-Noise Bursts With Announcements" up to 2004's "Margerine Ecplise". If those early records are any indication of what they'll be playing live, that's something I definitely do not want to miss. Band news 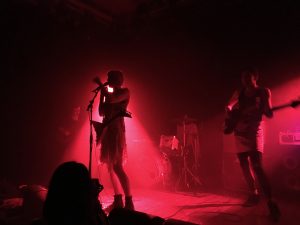 After two incredible albums, 2015's Sore and last year's Heaven, Dilly Dally is currently one of my favorite bands. So great seeing them again in Amsterdam yesterday. The hurricane force of Katie Monks is truly unbelievable. Music

Residents of the US are an unlucky bunch, but at least they'll have the privilege of seeing Bikini Kill perform live for the first time since 1997. Music

I expected Mary Timony's new band Ex Hex to be a one-off, but hell no: there's a new record out in March. Music

In 2018 I still haven't broken out of the indie rock circle that I've been lost in for the last 25 years. The best music has guitars. The best songwriters are women. Just like it has always been. These are my favorite albums of last year:

These last few months I finally found the time and inspiration to finish a few songs of which the underpinnings have been lying around for quite some years. Drawing from this unexpected rush of inspiration I even created an entirely new one, on my birthday, in the span of an hour and a half. I can't deny feeling at least a little bit proud of those five Wolfshoek songs. They're short and sketchlike, all five together are over and done with in a little over ten minutes. But I seem to have regained the joy of making music and that's a thing that excites me. I'm looking forward to creating some more songs in the next year. Wolfshoek

And this is the ‘too long, didn't listen’ list of just my ten favorite songs, also from the least to the most noisy. Music

These are my favorite songs of this year. I figured I had to stick them in some order, so I ordered them from the least up to the most noisy. Music